John Maxwell said, “Leadership is influence”. That statement implies two aspects of what leadership is and how it works. Firstly, you can exercise leadership with anyone or any group of people with whom you have some influence. Secondly, leadership in itself is exercising influence in the lives of those you lead. It is influencing them in their thinking, behaviour, decision making, etc.

I also like another statement Maxwell made, “A leader is one who knows the way, goes the way, and shows the way.” This encapsulates what effective leadership is – it is leadership by example.

The most effective leadership is based on relationship not position

Leadership begins with leading ourselves before we try to lead others. Getting our thinking and mindsets aligned with God’s Word and from that right thinking, making the right choices.

As men, we have influence with a range of other people. With our wives and children, with our workmates and neighbours, with extended family members, people we play sports with or connect with at church. Each of those relationships gives us an opportunity to exercise leadership through the way we live our own lives. 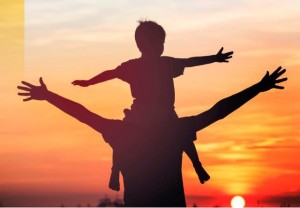 Remember this, the most effective leadership is based on relationship not position. A person who relies on their position to exercise their leadership will find their influence hard to maintain. Most people will obey someone who has a legitimate role of authority for a period of time but if they continually act bossy and controlling we are increasingly less likely to respond to them as our respect for them wanes. On the other hand, if that same person builds a meaningful relationship with us and their style of leadership is empowering and releasing rather than restrictive and controlling, we will most likely follow them all the way.

A father who is controlling, demanding and relies on his position as head of the home will find as the children begin to mature they begin to resist his demands. On the other hand, if that same father builds close relationships with his children based on open communication about the boundaries he expects them to respect, engaging them in the discussion, the children will begin to understand the benefit of making right choices for themselves.

I grew up as a skinny, asthmatic kid from a pretty broken home. One of my early experiences with true leadership came through an older man who had recently retired from years as a missionary in Papua New Guinea. He took me under his wing for a few months and met with me every morning before I went to work and prayed with me and chatted with me about the scriptures. He gave me a powerful example and built relationship with me in a way that still impacts me over 50 years later!

Leaders are not born, they emerge through a commitment to the process

The Bible is full of reluctant leaders like Jeremiah and Gideon. People who had a low opinion of themselves, had not started life well or lacked what they considered to be essential capacities for leadership. God thought otherwise and spoke to their potential, calling forth their destiny.

• God is not looking for your ability, He only needs your availability.

• Leadership skills can be learned, therefore anyone can develop their leadership abilities. Leaders are not born, they emerge through a commitment to the process.

• Leadership flows out of having a healthy sense of identity, replacing our old identity with a new one that reflects all that scripture declares us to be – being “transformed by the renewing of your mind.” Insecurity in leadership does untold damage.

• Leaders take 100% responsibility for their own lives. They don’t make excuses or blame things outside their own control. They respond with reasons and come up with results.

• Leaders understand that developing their leadership skills takes time and is a major priority for their future effectiveness in life.
What do you need to adjust to lead your own life better? What do you need to learn or adjust in order to be a better leader to others?