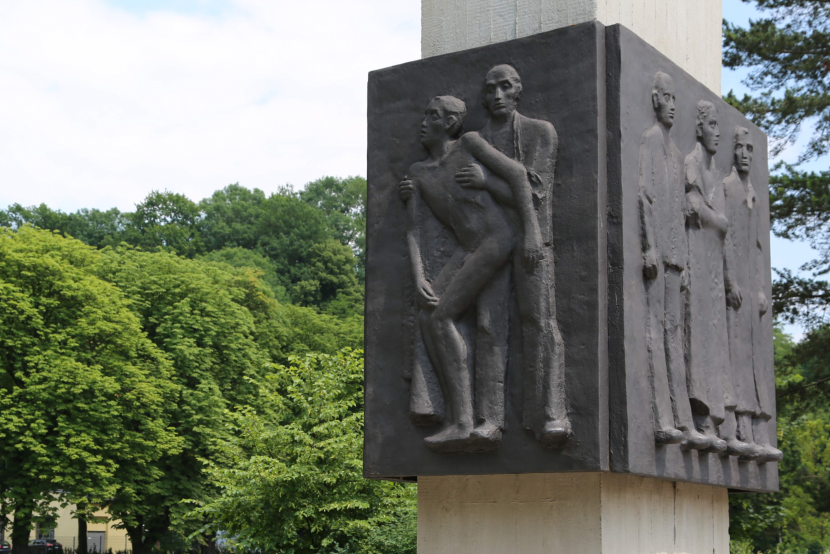 My Father, John Bernard Goulter WWII 28748, was in a German POW camp and part of Stalag VIII-B, sub-unit 344. The image above is the only memorial dedicated to Stalag VIII-B POW and Polish resistance fighters. The memorial is in Český Těšín.

I am 68 years old and have not been involved in any form of military service during my life. This I count as a blessing.

My age group were the last group who participated in the ballot system for compulsory military service. The ballot which I was allocated to, I missed the birthday call up list and then the whole process was cancelled by the government of the day weeks after the ballot. Few who were called in that last ballot chose to do the active service training.

Over the years I have watched many movies and documentaries on the wars of the 20th Century, and I still consider myself blessed to have missed all such conflicts.

My Dad as an underage person signed up as a volunteer in 1939 for the Second World War with his mates and to the horror of his family. After signing up, my Father must have had a reflection on his choices and decided to navigate the war in a safe as possible role. So, without a driver’s licence he volunteered to be a truck driver believing that to be a safer role. Little did he know that his truck was going to be a gun carrier towing not only the gun but an ammunition trailer. His position in battle was the front line. So potentially the wrong choice in finding a safer role.

My Dad served in the disastrous Greek campaign and in the flight from the Greek peninsular he and 10,000 other troops were deposited on Crete. The battle for Crete was another monumental disaster by the leaders and the island fell with a significant number of the deposited troops finding service in the German war machine.

For the next four-and-a-half-years my Father served time in a German prisoner of war camp in Milowitz, in what is Poland today. He was part of the massive machine that was Stalag VIII-B, sub-unit 344, being a coal mine mainly maned by NZ servicemen. Stalag VIII-B was a massive industrial machine powering the German war effort with some 600,000 POWS in service.

Upon release from POW camp, my Dad was returned to England and the only positive from the war for my Dad was his meeting my Mother in London. She was an English citizen. In 1947 she came out to NZ to marry my Dad and they were faithfully married for 59 years until her passing in 2006.

Like many soldiers my Father spoke little about the war. He went to the grave with a lot of secrets from these five years of his life. What horrors he saw, what abuse he was subjected to, what decisions or actions he made that he regretted, what poor decisions that were made for him by others are now passed. My Father’s last years were impacted with a form of dementia. When you carry the huge burden of many unresolved issues, there is no wonder why our minds can shut down. God didn’t design us to carry such burdens.

My Father went to his grave saying the only good German was a dead one. While this is a very un-PC comment to make in today’s age, it somehow reflects the impact of those five years on his life.

After my Father’s death, my wife and I went to Crete to see where my Father fought and then we went on to Milowitz, Poland to find the location of his POW coal mine. I wish I had done that trip with my Dad while he was alive. Maybe he would have shared his burdens at those locations that would have set him free and maybe it could have resulted in a life of freedom to his last breath.  Maybe… one will never know.

In Crete we stood on the bridge were my Father’s unit tried to defend Maleme Airport from the German paratroopers. My Father told us it was like shooting ducks until they ran out of ammunition. Four-thousand-five-hundred Germans are buried on the hill in Maleme. It is an immaculately keep Cemetery and a humbling place to visit. The British War Cemetery in Chania is equally nice but a much smaller affair. We travelled across the rugged island were the troops walked to escape from the Germans and then did the return trip, as did most of those same men after the surrender. We travelled in an air-conditioned car in a matter of hours vs the days of walking with minimal supplies by my Father all those years earlier.

In Milowitz we found the exact location of the coal mine that had been closed and removed about two years previously. From Milowitz my Father was involved in the Great March. This is recorded as one of the great human survival stories of all time.

All in all, our trip was a great experience. Quite surreal. A great investment in time and money.

So, to men like my Dad who served our country out of duty, compulsion or mistake – We honour you for your sacrifice.